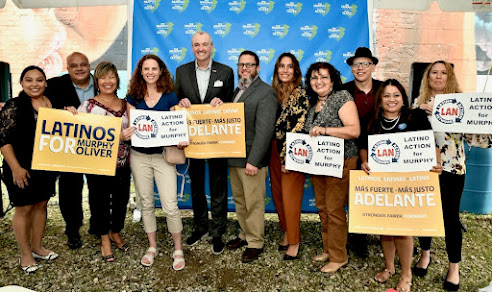 Citing a long list of accomplishments, members of the Latino Action Network stated that Phil Murphy kept his promises and deserves another term as Governor of the State of New Jersey.

“The Latino community has accomplished more with Phil Murphy than we have under any other Governor in the history of New Jersey”, said Latino Action Network President Christian Estevez. “Governor Murphy has been a great partner in helping us move forward on a myriad of policy issues that have languished under previous administrations.”

“The Latino Action Network gives Governor Murphy special credit for his support for our key priorities including his signing of bills providing financial aid for DREAMers, driver’s licenses for immigrants, and the establishment of a fund to assist those that were excluded from relief during the pandemic,” he added.

LAN policy leaders provided more examples of the process the Latino community has made in partnership with Governor Murphy.

“We have made great strides under Governor Murphy in the area of housing equity and tenant protections. Just this summer he signed sweeping protections for tenants economically devastated by the pandemic. He also supported and signed legislation that restricts the ability of landlords to look back into the past criminal records of prospective tenants. Everyone deserves a chance at redemption. We look forward to another four years of Governor Murphy’s progressive agenda,” said Frank Argote-Freyre, President Emeritus and Chair of LAN Housing Committee

“Governor Murphy has signed numerous historic criminal justice reform and social justice bills into law, like the legalization of cannabis and the Emergency COVID Bill that humanely released several thousands of our sisters and brothers from incarceration in 2020. We look forward to working with the Governor on the implementation of these laws and continued progress on others,” said Ana “Cuqui” Rivera, Secretary and Chair of LAN Criminal Justice Reform Committee

“In September 2020, Governor Murphy signed into law New Jersey’s Environmental Justice law, which is the strongest measure in the nation to protect overburdened communities from pollutants. The law defines overburdened communities as those where a high percentage of residents are low-income, minority, and with limited English proficiency. This welcome law will make Latino communities stronger, healthier, and more resilient,” said Cynthia Mellon, Chair of LAN Environmental Justice Committee

“Over the last few years, Governor Murphy’s leadership has improved the lives of low-wage and poor families in New Jersey through expansions of the Earned Income Tax Credit (EITC), an increased minimum wage, improvements in the Temporary Assistance to Need Families (TANF) program, access to free college, and other interconnected supports for basic necessities. With these strong policy changes, residents have a greater quality of life and we have a stronger economy for all,” said Renee Koubiadis, Chair of LAN Equity Committee

“While we are extremely proud of all we have accomplished so far with the Governor, we know that we still have much work left to do,” concluded Estevez. “That is why the Latino Action Network has endorsed Governor Phil Murphy for another term and will do everything in our power to help him win re-election.”

LAN is a broad, statewide coalition of Latino organizations dedicated to political empowerment, social justice, the promotion of civil rights, and the elimination of disparities in various areas including education, health, housing, and employment. It was founded in 2009.