The following Op-Ed was written on behalf of the Latino Action Network by LAN Steering Committee member John P. Leschak, Esq. and appeared in today's Star-Ledger.
N.J. correctional facilities should stop honoring ICE detainers: Opinion
Star-Ledger
December 15, 2014
By John P. Leschak
For many years, we have had two systems of justice in New Jersey and in other parts of the nation: One for immigrants and another for everybody else.
At the heart of this unjust system are the detainers placed on suspected undocumented immigrants by the U.S. Immigration and Customs Enforcement (ICE) agency of the Department of Homeland Security. A detainer is a legal request by ICE to hold an individual, most often picked up for minor offenses, even after they have posted bail. These detainers can lead to the incarceration of individuals for weeks and months without a proper hearing on the charges against them.
As President Obama forcefully stated in his recent national address, we need to move away from a deportation policy that breaks up families. The current detainer policy is a vestige of a flawed system.
These detainers are immoral, unjust and most likely illegal, according to a federal appeals court, that ruled earlier this year that they violate the U.S. Constitution. The court found that the federal government cannot force states and municipalities to honor these detainer requests and unjustly jail immigrants.
To be clear, before a court releases anyone charged with a criminal offense, an assessment of flight risk must be made and an appropriate bail set. It is important to note that a person charged with a crime – a minor or major offense – is presumed innocent until proven otherwise. This same legal protection extends to everyone. In addition, immigration matters fall under a separate area of the law and a determination of status in this country follows a very different legal process.
Given these facts, the Latino Action Network calls on all New Jersey correctional institutions to stop honoring ICE detainers. We echo the call of the American Civil Liberties Union that has already begun to champion this effort. Currently five New Jersey counties have decided to stop honoring ICE detainers. (Middlesex, Ocean, Union, Burlington, and Camden).
If the injustice of illegal detention were not enough, the economics of improperly detaining immigrants should give local and county governments pause to question their current policies. State, county and local correctional institutions are not reimbursed for detaining these individuals and, therefore, the cost falls solely on local taxpayers.
Furthermore, holding immigrants for federal immigration authorities exposes local governments to lawsuits. Our Constitution protects any person from being deprived of liberty without probable cause, and without due process of law. Because ICE detainer requests are not supported by a judicial warrant, jails act illegally when they detain people based on them.
This legal liability is real. A Pennsylvania county recently paid $95,000 in damages for illegally detaining Ernesto Galarza, a U.S. citizen, for three days. All of this money had to come from the county coffers since the federal government told them they did not cover it. Also, in Oregon, a county paid $30,000 to Maria Miranda-Olivares, who was held in detention 19 hours after her criminal case concluded.
In the aftermath of these lawsuits, more than 250 jurisdictions, across the nation, have stopped complying with ICE detainer requests. It is time that all of our county jails and state prisons follow suit and decline to detain immigrants in the absence of a warrant issued by a U.S. magistrate.
Rejecting immigration detainers is morally right and has the added benefit of making good economic sense.
John P. Leschak, Esq., is a member of the Latino Action Network Steering Committee.
http://www.nj.com/opinion/index.ssf/2014/12/nj_correctional_facilities_should_stop_honoring_ice_detainers_opinion.html 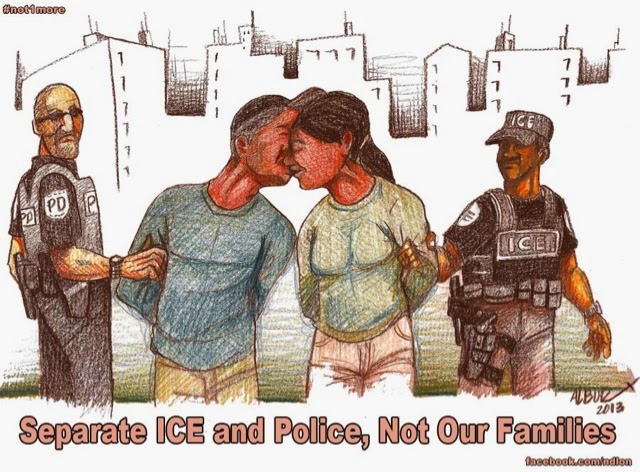