Ending the common-sense 2012 immigration initiative that has allowed more than 20,000 young New Jerseyans realize the promise of the American Dream and contribute to the state's economy would waste the potential of these young striving immigrants -- and cause serious harm to the Garden State's economy.

In fact, New Jersey would be one of the hardest hit states -- with the fifth largest economic loss -- if this successful program is ended.

The Deferred Action for Childhood Arrivals (DACA) program allows some undocumented young residents who were brought to the United States as minors to stay in the country and work legally. Since its inception, it has given 800,000 young people across the nation a better shot at success. And its recipients have capitalized on the opportunity, getting better jobs, earning higher wages, increasing their participation in the consumer economy and paying taxes.

But now DACA is under attack and President Trump has only until Sept. 5 to either end the program or fight a lawsuit from 10 state attorneys general; rumors are swirling that he may end the program at any moment. Doing so would disproportionately harm communities across immigrant-rich New Jersey and would be a huge step backward for the country.

To many undocumented youth who were brought to the U.S. as young children, DACA was the first real opportunity to pursue the American Dream and show their potential in ways that had been denied to them solely because of their legal status. DACA permitted many of them to obtain a driver's license, secure a job that matched their skillset, purchase their first car, travel abroad, attend college and - most importantly - feel less fear that they'd be separated from their families and communities via deportation.

When more people are able to work legally in higher paying jobs that match their skills, they are less vulnerable to wage theft, workplace exploitation, and less likely to suffer from discrimination due to their legal status. All of these factors help the economy of our state and the nation, as they are translated into higher tax revenue and more economic productivity.

With 22,000 DACA recipients, only eight states have a higher number than New Jersey. Of these young New Jerseyans, 87 percent are working. They contribute $66 million in state and local taxes each year, the seventh highest level of all states. Ending DACA would cause an immediate 32 percent reduction in those tax payments.

But the potential harm to New Jersey's economy is much broader than the reduction in tax collections. In fact, if DACA is repealed, the Garden State would lose an estimated $1.6 billion each year in state Gross Domestic Product - the fifth largest dollar loss of all states.

Ending DACA would also create economic uncertainty for many families.

Many of the young DREAMers -- armed with the slightest bit of economic security -- have been able to take out loans to buy a car or a home, to pay for college or to open a small business. If the program ends, many of these young immigrants will either lose their job altogether, or be forced back into the shadowy low-wage underground, seriously limiting their ability to keep up with loan repayments and starting a cycle of economic distress.

New Jersey's Congressional Republicans -- who played an outsized role in ensuring that the Trump administration failed to strip health care from millions -- must step up again and put the best interests of the state and country ahead of political party. 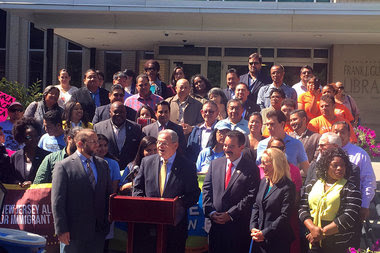 Sitting on the sidelines and watching as the lives of enterprising immigrant youth are turned upside down is not OK. Our state's moderate voices must join their GOP colleagues from both blue and red states who are voicing their support for DACA and urging President Trump to keep the program intact.

Despite the myths and xenophobic falsehoods spread by some, we know that once young immigrants are given the chance to participate in America's economy and society, they capitalize on the opportunity.

And we all benefit. Lawmakers should be focused on providing these -- and other -- striving immigrants a real shot at the American Dream, not on stealing their economic futures and dimming ours.

Erika J. Nava is a Policy Analyst at New Jersey Policy Perspective, a liberal think tank, which drives policy change to advance economic justice and prosperity for all New Jerseyans.

http://www.nj.com/opinion/index.ssf/2017/08/ending_daca_would_harm_njs_economy_waste_potential.html
Posted by LAN at 12:11 PM No comments: