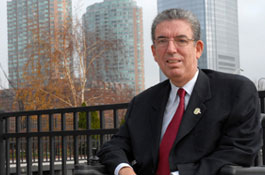 The members of the Latino Action Network are deeply saddened at the news of the passing of our friend Daniel Jara, Founding President and CEO of the Statewide Hispanic Chamber of Commerce of New Jersey.  We send our deepest condolences to his family.  For those of us that had the privilege of working with Daniel for the betterment of New Jersey's Hispanic community, he will be sorely missed.  Daniel Jara was a founding member of the Latino Action Network when we launched our organization in January of 2010.  His contributions to our organization and to our state will always be remembered.

Announcement from the Statewide Hispanic Chamber of Commerce of New Jersey:

Death of a Hispanic Trailblazer

It is with the deepest sadness and sorrow that we announce the death of our Founding President & CEO, Dr. Daniel H. Jara.

Dr. Jara was  a hardworking businessman and a leader in the Hispanic Community. He was born in Lima, Peru; where he obtained his primary and early secondary
education. He came to New Jersey at the age of 14 and graduated from Eastside H.S. in Paterson. He attended
Rutgers University, obtaining a Bachelor's Degree in Economics and Accounting and M.A. in Finance and
Business Administration.

He was the Owner of Rimac Agency, Inc., an insurance, Hispanic market and international trade consulting firm. As head of the Greater Paterson Hispanic Chamber of Commerce, Dr. Jara came to realize more needed to be done to ensure that Hispanic Business owners were in touch with the state and each other.

In 1989, along with 4 other volunteer Hispanic Leaders, the Statewide Hispanic Chamber of Commerce was formed in order to bridge that gap. For 22 years, Dr. Jara lead the Chamber to an become a large organization that was dedicated to advancing and advocating for business interests for the Hispanic Community in New Jersey.

Upon Dr. Jara's retirement, SHCC-NJ Chairman Emeritus, Harry Ayala, said,"Daniel has been a tireless and powerful voice for New Jersey's Hispanic business community for many years. He's been a constant and well-known presence throughout the Garden State, whether it was holding meetings at the State House, in corporate offices, or with the owners of small businesses seeking advice on how to get started and succeed in their entrepreneurial endeavors."
He changed the landscape for thousands of Hispanic men and women in the business arena and we are grateful for his contributions."

Daniel's leadership reflected in fostering economic growth and visibility to New Jersey. As a steadfast leader, he headed and participated in countless events, meetings and trade missions. He served on many committees and boards of organizations to ensure that the Hispanic Business Community was always well represented.

He is survived by his devoted wife, 2 sons, and granddaughter.

Our condolences go now to his family, his friends and all who were close to him.  We will be mourning the loss of a steadfast leader, businessman & colleague.

Check out the following Coming Events:

To include your event on the LAN Event Calendar, please send text of full event information to LatinoActionNetwork@gmail.com. Please remember to include: name of event, date, time, location, contact information and a brief description of the event. The Latino Action Network reserves the right to reject any submission with or without cause.
Posted by Chris at 12:49 PM No comments:

We are offering a free legal clinic for all youth who qualify and wish to apply for Deferred Action (DACA). Each applicant will receive immediate assistance with preparing your application before consulting with an immigration lawyer who will review your qualifications and documents, and conduct a brief interview to determine if the DACA program will benefit you.

We will make copies of all your original documents. When you are finished with the legal consultation, your application will be ready for you to submit to USCIS along with the filing fee of $465.00. See the list of documents you need to bring at http://njdac.org/blog/2012/08/15/deferred-action-documentation-checklist/

APPLICANT REGISTRATIONAdvance registration is not required for applicants, but those who register in advance at http://tinyurl.com/DACAappReg will receive informative updates. If you are under 18 years, you must be accompanied by one of your parents or legal guardian.

VOLUNTEERS, DONATIONS & SPONSORS
To serve as a general volunteer or lawyer for the clinic, please register at http://tinyurl.com/DACAVolunteers. Volunteers must speak and read English and must arrive at 9:30am for a required training session.

To make a donation of food or money, or for more information please contact Andrea andrea@njdac.org or Kimi Wei kimi@bergenlatinos.com.

ORGANIZERS & SPONSORSTo provide this assistance at no cost, lawyers, members of social justice organizations and the community have joined together, including:

New Jersey’s Democratic-controlled Senate approved a bill to raise the minimum wage to $8.50 as a showdown with Republican Governor Chris Christie looms over a provision that would allow annual increases pegged to inflation.

http://www.businessweek.com/news/2012-11-29/n-dot-j-dot-lawmakers-pass-minimum-wage-boost-as-showdown-looms
Posted by LAN at 9:53 PM No comments:


The Congressional Hispanic Caucus announced today their principles on immigration reform.  The CHC issued a document titled: "ONE NATION: Principles on Immigration Reform and Our Commitment to the American Dream" that spells out nine (9) principles for immigration reform including a path to permanent residency and eventual citizenship for the estimated 11 million undocumented immigrants in the United States.  It also includes protections for same-sex couples.   A copy of the document appears below.

ONE NATION:
Principles on Immigration Reform and Our Commitment to the American Dream

Today, we declare our commitment to the American people to work tirelessly toward common-sense, comprehensive immigration reform that serves America’s interests, promotes fairness and the rule of law and contributes effectively and meaningfully to our economic well-being and recovery.

America has always been a nation of immigrants. In order to preserve our history, national identity and culture we must create a modern, 21st century legal immigration system that reflects our legacy. Therefore, we commit to fighting for principled, comprehensive immigration reform that:

1. Requires the estimated 11 million undocumented immigrants in the U.S. to register with the federal government, submit to fingerprinting and a criminal background check, learn English and American civics, and pay taxes to contribute fully and legally to our economy and earn a path to permanent residency and eventual citizenship;

2. Protects the unity and sanctity of the family, including the families of bi-national, same-sex couples, by reducing the family backlogs and keeping spouses, parents, and children together;

3. Attracts the best and the brightest investors, innovators, and skilled professionals, including those in science, technology, engineering, and math (STEM) studies, to help strengthen our economy, create jobs, and build a brighter future for all Americans;

4. Builds on the extraordinary success of the Deferred Action for Childhood Arrivals (DACA) program and incorporates DREAMers—those who were brought to the U.S. at a young age and are Americans but for a piece of paper—into the mainstream of life in the United States through a path to citizenship so that America benefits from their scholastic achievements, military service and pursuit of their dreams;

5. Includes a balanced, workable solution for the agriculture industry that ensures agricultural workers have a route to citizenship and employers have the workers and American agriculture continues to lead in our global economy;

6. Ends the exploitation of U.S. and immigrant workers by providing sufficient, safe, and legal avenues for foreign workers to fill legitimate gaps in our workforce, with full labor rights, protection from discrimination, and a reasonable path to permanency that lifts up wages and working conditions for both native and foreign-born workers and their families;

7. Ensures smart and reasonable enforcement that protects our borders and fosters commerce by targeting serious criminals and real threats at our northern and southern borders and promotes the safe and legitimate movement of people and goods at our ports of entry and which are essential to our economy;

8. Establishes a workable employment verification system that prevents unlawful employment and rewards employers and employees who play by the rules, while protecting Americans’ right to work and their privacy; and

9. Renews our commitment to citizenship, to ensure all workers pay their fair share of taxes, fully integrate into our way of life and bear the same responsibilities as all Americans and reaffirms our shared belief that the Citizenship Clause of the Constitution is a fundamental freedom that must be preserved.

Our immigration laws ought to reflect both our interests and our values as Americans and we believe these principles are consistent with our nation’s commitment to fairness and equality. We commit to adhering to the above principles as we negotiate on behalf of all Americans in good faith with both parties and all stakeholders in the immigration reform debate. We acknowledge that the time to reform the system is long past due. We ask all sides to set aside the vitriol and gamesmanship that is often a part of this debate and that blocks our ability to truly solve the problem. The American people deserve nothing less.

New Jersey is home to the second–largest Cuban community in the country. In this book Milagros Castillo-Montoya, Doctoral Candidate at Columbia University, presents a carefully researched social history of this vibrant immigrant group, enriched with the words and vignettes of the people who actually lived the experience of dislocation and adjustment while creating meaningful new lives in New Jersey. Published by the Newark Public Library, this study is the first in a series exploring the Latino immigrant experience, being developed by the NJ Hispanic Research and Information Center (NJHRIC) @ The Newark Public Library.

Zulima V. Farber, Of Counsel to the Firm Lowenstein Sandler PC, will present “Cubans in New Jersey: Migrants Tell Their Stories.”  Ms. Farber, who was born in Cuba and came to the United States in her teens, is the first Hispanic woman to become a partner at a major law firm in New Jersey as well as the first to have served as a New Jersey cabinet officer. She served as New Jersey Public Advocate and Public Defender in former Governor Florio's cabinet, and as Attorney General in Governor Corzine’s cabinet.

Additional commentary will be provided by the author, Milagros Castillo-Montoya and Dr. Olga Jiménez-Wagenheim, Professor Emerita, Rutgers University, who served as Director of the Latino Community Profiles Project.  The publication of "Cubans in New Jersey: Migrants Tell Their Story" was made possible in part by a generous donation from Esther Gatria in honor of her late aunt, América Gatria.

This event is cosponsored by the Friends of the HRIC (FoHRIC), an organization established to support the work of the NJHRIC with the goal of spreading the word about the need to establish a historical repository to preserve data on various Latino communities in New Jersey. The FoHRIC (www.friendsofhric.org) also sponsors events and activities that help increase awareness of the various Latino communities in New Jersey.

A reception and book signing will follow the presentation. Cubans in New Jersey: Migrants Tell Their Stories will be available for purchase at this event.

Directions to the Library and parking information: http://www.npl.org/Pages/AboutLibrary/directions.html

All Newark Public Library programs are free and open to the general public.

For additional information, please call 973–733–7772 (Sala Hispanoamericana) or email ibetancourt@npl.org.
Posted by Chris at 11:50 AM